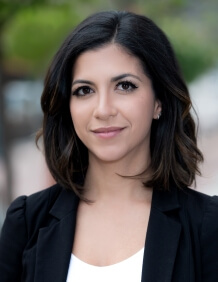 Madalia was born and raised here in Colorado. As a high school student, she competed in the mock trial program which sparked her passion for trial advocacy. Prior to joining the Richards Carrington team, Madalia was a prosecutor for the Adams County District Attorney’s Office for five years, and interned at the Jefferson County District Attorney’s Office while she was studying at the University of Denver. She managed a voluminous criminal docket where she prosecuted serious crimes from their inception through trial and everything in between. She has worked on a wide variety of cases including DUI, domestic violence, sexual assault, homicide, arson, drugs, and gang violence. She has also handled many matters involving at-risk victims, and competency proceedings. Madalia tried over 50 trials before a judge or jury, and loves being in a courtroom.

During her tenure as a deputy district attorney, she was mindful of the immense power and responsibility that came with public service. She put into practice one of her mentor’s guiding principles, “do the right thing, at all times, in every case, no matter what.” Madalia’s approach to prosecution was highly respected not only by her fellow prosecutors, but by members of the defense bar and bench. She encouraged her office to engage in discussion regarding the role of the prosecutor, police brutality, mass incarceration, and the impact of racial bias in the criminal justice system.

The insight gleaned through her prior experience is now an invaluable playbook for how she approaches her cases. She utilizes her skillset to critically analyze weaknesses in the government’s case, and goes to bat for her clients to achieve the best outcomes possible.

In addition to private practice, Madalia is an adjunct professor at the University of Denver Sturm College of Law. She teaches the prestigious National Trial Team, which she was a member of during her time as a law student. Throughout the semester, she works to transform law students into fierce trial advocates. Madalia, along with her co-professor, coached the 2019 National Ethics Competition Championship Team.