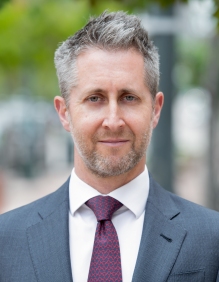 Doug has been an Assistant United States Attorney and Assistant District Attorney. Now that he is in private practice, Doug is one of Colorado’s most experienced and acclaimed criminal defense lawyers. AV rated by Martindale-Hubbell, with a perfect 10.0 / “Superb” rating by AVVO, Doug has been chosen as a “Rising Star” for several years—a distinction limited to 2.5% of Colorado’s practicing attorneys under the age of 40. Most recently he was recognized as a Super Lawyer for White Collar law. In 2015, he was selected for “The Client’s Choice” Award.

Prior to becoming a federal prosecutor, Doug had been an award-winning Assistant District Attorney (ADA) with the Harris County District Attorney’s Office in Houston, Texas. During his tenure there, he tried more than 70 criminal jury trials, including prosecutions of murder, armed robbery, kidnapping, sexual assaults of adults and children, kidnapping, DUI and drug possession.

Recognized as a star within the DA’s office, Doug was chosen to work in the Vehicular Crimes Division. As a prosecutor, Doug’s responsibilities for these cases would often begin in the middle of the night, at the scene of a fatal crash. Along the way, Doug would direct officers and crash investigators through collecting and preserving evidence, drafting search warrants, and preparing the case for grand jury indictment or court. For this work, Doug received awards from Mothers Against Drunk Driving in 2007 and 2008.

In addition to working his own cases, Doug trained prosecutors and police on matters of law and procedure. He was responsible for addressing others’ mistakes when they erred. He perfected the art of drafting a successful, “airtight” warrant, having personally drafted hundreds of search and arrest warrants, and reviewed countless others. Doug has brought all of this experience into his private practice, allowing him to quickly identify any deficiencies, inaccuracies, and mischaracterizations in a prosecutor’s case.

In addition to his criminal work, Doug is an experienced civil and commercial litigator with a focus on trial work.

Doug is also a legal analyst and commentator, and has appeared in a number of print and broadcast outlets both locally and nationwide. These include USA Today, the Detroit Free Press, the Dallas Observer, the Houston Chronicle, Enid News & Eagle, as well as a number of Denver-based news affiliates.

90% of Practice Devoted to Litigation